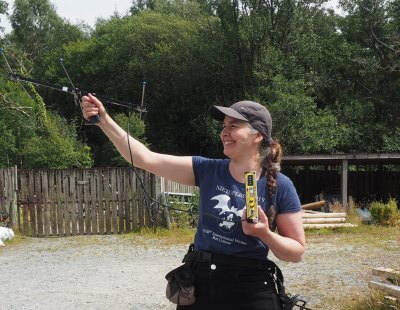 Titley’s Regal receivers were used by Auritus Wildlife Consultancy to track bats in Galloway, UK in 2022.

Whiskered bats (Myotis mystacinus) were caught in mist nets on the first night and radio tags were attached to two females and one male. On the second night, only a small male was caught and so released.

Some interesting findings to help us understand Whiskered bats:

- After the first night, three full nights of radiotracking provided enough data to establish that the three bats' combined foraging area was in woodland and their range only covered approximately 30 hectares.

- They roosted separately, mainly in trees, but the male moved from a tree to a building at the end of the week.

- One female also moved a short distance from her tree to a house roof for two nights.

- The second female used at least three trees as roosts during the week.

The project could not have been more successful!

Thanks to the brilliant Auritus team.