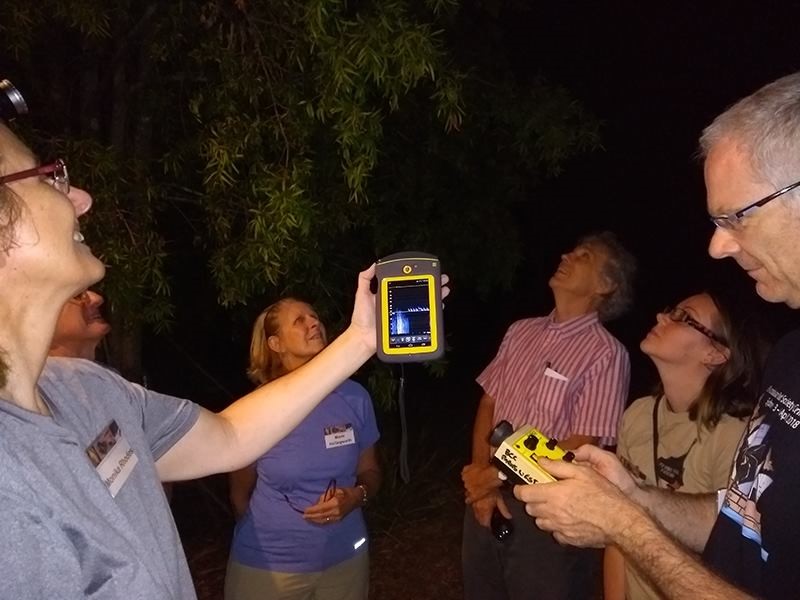 The Australasian Bat Night is an annual community event to:

• engage the community in wildlife management, and

• introduce a group of mammals that are inconspicuous and largely neglected when discussing urban conservation.

This year’s CWCN bat night focused on the topic of ‘Bats and their habitats’. To outline the specific habitat requirements of different bat species, we provided an overview of what bats are, introduced their biology and then focused on their amazing adaptations. This includes features like ears, nose, feet, wings and of course echolocation. The presentation introduced the variety of bats and where they roost and forage; and then focused on specialisations of bats found in the area of CWCN, based on a survey carried out for the CWCN in 2014/15.

We introduced the range of echolocation calls from different bat species recorded in CWCN and showed their sonagrams and sounds recorded with Anabat detectors. The presentation then outlined how adaptations of larger bodies, long narrow wings, stocky, rigid ears, and low frequency echolocation allows some species to specialise in open habitats while being restricted in dense habitats. While other bats are adapted for forage in denser habitats but would be less suited in open habitats. This presentation finished by stating the importance of protection of a wide variety of habitats in urban areas in order to keep our bat diversity. We also debunked that just because bats can fly, they are still impacted by habitat loss and that one fit for all does not apply – based on the different habitat requirements of different bat species.

Following on from the presentation and a 45 minute Q&A session with lots of interesting and intelligent questions, we then divided the 50+ strong group into 3 groups and walked down to Cubberla Creek using two Anabat Walkabouts (one of which was kindly loaned by Titley Scientific), one 20 year old Anabat II detector (still going strong) and another bat detector. The bat walks were received very well as the people enjoyed seeing at least five species of bats flying, and hearing and seeing their calls on the detectors. It was an experience most people never had. The visual display helped the people to see the differences of echolocation calls produced by the species and how bats can be identified using the species-specific call sequences.